Bees and Spirits: How Distillers are Helping Bees?

Bees require rehabilitation in population. Bee populations are in decline around the world, and if they disappear, our life will be at risk. In the spirits industry, there are professionals who are sharing their love for the bees by protecting them in different ways. We talked to farmers and distillers who support bees and asked them how they save the pollinators and why they decided to do that.

Abbie Neilson, co-founder & director at Cooper King Distillery says that keeping bees is beneficial not just for the production of their carbon-negative gin, but for the environmental reasons as well.

"My father, Graham, started beekeeping when he retired 10 years ago. His grandfather kept bees in a little orchard and his school also kept a hive, which was used to teach children of the importance of bees as pollinators for growing crops. As a lover of both honey and nature, beekeeping seemed a natural fit. It started as a one-hive retirement project, but he now cares for around 10 hives."

Raw honey from Abbie's father apiary is an essential ingredient in their award-winning gin. "It was important to use my father’s raw honey in the recipe, not only because it is delicious and adds a silky sweetness to the spirit, but also to support his beekeeping. The small income he earns from honey sales helps to cover the costs such as special equipment, disease prevention and planting bee-friendly flowers. Despite the seasonal setbacks he often experiences, he is passionate about beekeeping for environmental reasons. Small-scale beekeepers like my father are bolstering local bee populations and helping safeguard British agriculture which depends on pollinating insects for crop production."

Abbie emphasizes that bees are amazing insects, and people don’t appreciate what they do for the environment. "We simply would not have food in abundance without them. For us at Cooper King, the privilege of working with bees is full traceability that comes with producing your own raw honey. It is not imported, mixed or heat treated, and obtained from healthy, thriving colonies."

Abbie is  also concerned about the decrease of bees population and the further consequences of this decrease for our planet. "The majority of the world’s crops rely on pollination by bees and other insects. They are suffering a serious decline, largely due to habitat loss, toxic pesticides and climate change. This is causing global concern, because the larger food economy could be affected as a result. According to the UN, the world must shift towards a predominantly plant-based diet if we are to slow the disastrous implications of climate change and support the growing global population. Therefore, it is imperative that we safeguard insect pollinator species to ensure crop yields do not experience further decline."

"One of the privileges [of helping bees] is protecting a bee species that doesn’t occur anywhere else in the world", - says Dr Ernst Thompson from Van Hunks Drinks.

"As Cape Town has a different bee species to the rest of the world know as Apis Mellifera Capensis, where there rest of the world has Apis Mellifera Scutellate. So we have a species here that occurs nowhere else. The species are very closely related with a few minor differences such as that a Cape Town worker bee can lay an egg that can turn into a queen, where none of the other worker bee species can do that. So looking at Cape Town, we need to preserve our heritage being part of the fynbos to keep the bees alive. Another personal privilege is the fascination you get when working in a hive, being able to observe what they do. They are fascinating creatures.

"The better the bee population, the better our planet and civilization", - says Dr Ernst Thompson. "We just can’t afford to lose the bees. As soon as the bees are gone, we will all die – it’s as simple as that. Crops will start failing, nature will follow suit soon after and it will be an absolute disaster." 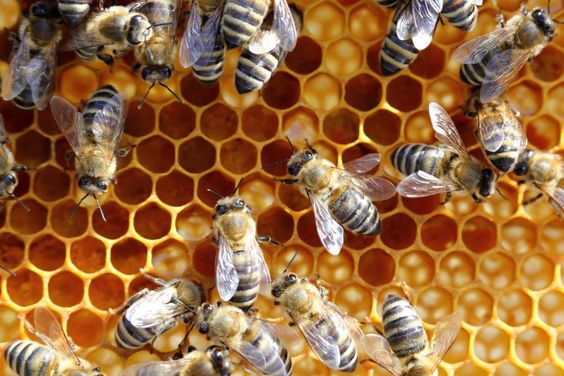 "We were looking to use natural sweeteners sourced from our farm to enhance flavour. Raw British honey was a real winner, bringing a delicate sweetness and floral complexity to our gin. Honey also changes the viscosity of the gin, meaning it coats the mouth and changes the flavour profile of our Honeybee gin. Over the last few years, although our apiary has grown to house over 1.2million bees, they can’t always keep up with demand. That’s why we work closely with other local beekeepers to ensure we only use Northamptonshire honey in our Honeybee gin. After all, real tastes better! "

As a beekeeper, there is something that makes you feel grounded working with bees, - says Jonny. Apiculture or beekeeping is a craft which has gone relatively unchanged for centuries, and the smell of beeswax, honey and woodsmoke is a seasonal joy. It is a great combination of craft and science, the perfect example of ecology and biology plus what you can do with your hands (hive manipulations and woodwork) delivering epic results.

Jonny highlights the connection between bee population and planet health:

"It’s a fact that without bees we would not have many of the foods or ingredients we have today. Over millennia plants have evolved to take advantage of insect pollinators, and have adapted to be as attractive as they can to pollinators. Some fruits will only drop pollen at the same frequency as the hum of a bee; without pollen, there’ll be no fertilisation, no next generation. A declining pollinator population raises concerns for food security and also the wider countryside, including wildflowers and food webs who depend on the services of pollinating insects. It is science we need to trust when it comes to identifying the cause of some declining bee species and I believe future young scientists will help solve the problem."

For Avallen it's all about protecting wild bees, rather than the honey bee, says Tim Etherington-Judge, co-founder of Avallen Spirits.

"There are thousands of species of bee in the world, most of which are solitary bees and don't hive in huge numbers like the honey bee Bumblebees, Miner Bees, Leafcutter bees, Scissor bees, Cuckoo bees, Mason bees."

For every bottle sold Avallen donates to organisations and charities that champion the protection of bees and restoration of their habitats.

"The biodiversity of bees is super important, because honey bees cannot pollinate all flowers, and certain bees have specialised to pollinate certain plants. For example, only bumblebees can pollinate tomatoes!", - says Tim.

We asked the distillers what is their favourite fact about bees, and here is what we've heard.

Dr Ernst Thompson, Van Hunks Drinks: My favourite fact is that if you are working in a hive and the bees get stressed, the queen bee secretes a fermion that smells like bananas!

Jonny Easter, Warner's Distillery: To create a 1lb jar of honey, a bee would need to circumnavigate the globe twice, travelling a cumulative bee’s flight distance of more than 55,000 miles. That’s a lot of effort! So, in a 70cl bottle of our honeybee gin which has 5% honey content, that’s a bee’s flight from London to Quebec. How awesome is that!

Abbie Neilson, Cooper King Distillery: That the queen is key to survival of the colony, laying up to 1500 eggs a day!

Tim Etherington-Judge, Avallen Spirits: Honey Bees have a unique way to tell other bees where there's a good source of food. They do a little dance called a 'waggle dance' which communicates where the food is to the other bees.